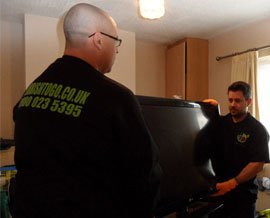 If you’ve got some old furniture in N6 Highgate, electrical appliances, sofas, mattresses or other unwanted items that need disposing of we can provide a same day or next day removal in N6 Highgate. Hiring Rubbish To Go for your furniture or waste disposal in N6 Highgate can get your home looking the way you want it to quickly and easily.

We provide same day or next day Mattress and Bedroom furniture disposal in N6 Highgate. We will send one of our two man crews, in N6 Highgate, to dismantle, remove and dispose of items such as: Beds, wardrobes, fitted wardrobes, chest of drawers, TVs and more…

We provide same day or next day old sofa disposal in N6 Highgate and all old living room furniture removal you may wish to have removed in N6 Highgate. We have many years of experience of dismantling and removing all kinds of old furniture in N6 Highgate.

If you’ve got some old electrical appliances in N6 Highgate that are just sat gathering dust in your home, then finding the right company to remove them is essential. Our furniture disposal teams in N6 Highgate will be able to get rid of any old appliances for you. We offer WEEE clearance in N6 Highgate and are in full compliance with the Waste Electrical and Electronic Equipment Directive.

If your garden in N6 Highgate is looking cluttered and is in desperate need for old garden furniture and rubbish to be removed, We are here to help. Old furniture such as benches or swings can be dismantled removed and disposed of quickly and usually on the same day…even larger items like the materials from old conservatories and extensions can be disposed of without fuss. Along with any garden waste such as sheds, hedge trimmings, grass cuttings or even trees and shrubs that are no longer wanted. Up to 87% of the rubbish we remove is recycled.

Another important factor to consider is how easy is it to get rid of all your unwanted items? If you live in N6 Highgate then space may well be an issue and hiring a skip just isn’t possible. It might be the case that you don’t have a place to stop and load a van yourself. These aren’t issues that you’ll have to worry about if you hire us to do all the heavy lifting for you. Rubbish To Go will bring a team to your home in N6 Highgate to make sure that all your unwanted items are removed quickly and keep disruption to you and your neighbours to a minimum.

Getting rid of everyday waste is no trouble at all, you place it outside once a week or fortnightly and it’s taken away for you. When it comes to big and bulky items like old furniture though, the disposal of this is much more complicated. Unless you have a large van, the manpower to shift the large items and plenty of spare time on your hands, then the only other option is to hire a team in N6 Highgate to do it for you. Contact us today to get your old furniture cleared in no time at all.

Contact Rubbish To Go for a free no obligation quote on our furniture disposal services in N6 Highgate.